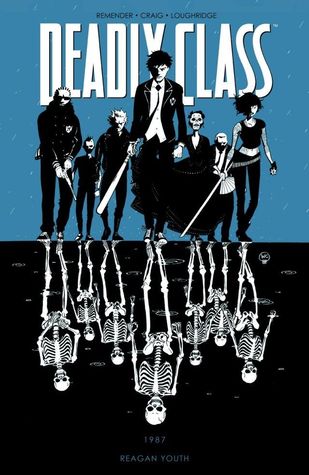 It's 1987. Marcus Lopez hates school. His grades suck. The jocks are hassling his friends. He can't focus in class. But the jocks are the children of Joseph Stalin's top assassin, the teachers are members of an ancient league of assassins, the class he's failing is "Dismemberment 101," and his crush has a doubledigit body count. Welcome to the most brutal high school on earth, where the world's top crime families send the next generation of assassins to be trained. Murder is an art. Killing is a craft. At Kings Dominion School for the Deadly Arts, the dagger in your back isn't always metaphorical.
- Goodreads.com

I’ve been really into graphic novels after finishing the latest installment of Saga, and this one popped up on my GR recommendations feed. Not knowing anything about it really, I decided to give it a go.

The story is about a homeless teenage boy, who gets taken in and recruited into a secret school for assassins. He has a brutal past which is slowly revealed through flashbacks, and which eventually as the story progresses, catches up with him.

While the premise isn’t exactly new, the execution is on pointe, and is delivered perfectly. Everything seems to have been thought of right down to the classes taken at the academy, Assassin psychology, Beheading, and Poison Studies among others. The Academy even has it's own cliques, just like a real highschool, but instead of Preps, Burnouts and Jocks, you have Mexican Cartel, Japanese Mafia and Neo-nazis.  However, the thing that really stood out for me, was the beautiful graphics and use of colour. For each scene there were only a few colours used, and it really helped to set the mood and enhance the scene. Some of the scenes are quite gorey, and some of the characters are horrifically disfigured, which just adds to the darkness of the novel.


The overall story was really good, and gathered in pace exponentially. While the main characters past was revealed slowly through the book, there is still so much that you want to find out about him. This is definitely a series that I am going to anticipate the release of the next volume.

Are you a fan of graphic novels? If so, have any suggestions?