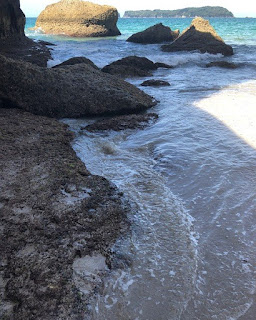 I feel like January brought adventuring which was great- even if there have been 2 heatwaves this summer already!

Me and my partner went camping for New Years with some friends which was great. I'd never been before so it was definitely a new experience with the limited facilities and long drops.

I sang Karaoke for the first time which was thrilling. I was almost soiling my pants before I went up, but then I was on stage singing and it was exhilarating. For those of you who care, I sang "There are worse things I could do" from Grease (I'm big into musicals haha).


There was a hens party and a wedding for an old friend. We went hiking in the Coromandel and got to visit the beautiful Cathedral Cove (featured), which was so gorgeous.

A few other notable mentions include a drag show and a male strip show haha. Reading wise, January was a good month for me. I had a bit of time off here and there so I was able to get some reading done. I'm not as hopeful for February though.

They Both Die at the End was my favorite of the month, just WOW! My review will be up soon, but  this book was so thought provoking and so well written.  Saga Volume 8 was of course just as good as its predecessors, there's not much I can say that I haven't already said before this series is so good.

Alex + Ada was a nice surprise, but almost too short. I wanted more of it and I wish the story could have been extended out. At the same time the ending was fitting and wrapped up nicely. I was glad to be able to finish a series this month when I completed the final installment in the To All the Boys I've Loved Before Series, Always and Forever Lara Jean. While the book probably wasn't necessary, it was a nice 'ending' as Lara Jean goes off to college.

Up Next In February

Going with the flow in January actually worked really well for me. I picked up books as I felt in the mood for them and I also DNF'd or put on hold books which I wasn't feeling (Which is one of my goals for this year). I'm going to go with the same concept in February and only have a few books that I really want to read and the rest is up to my mood.

Did you go on any adventures over the New Year period? What was your favorite memory of January?