So reflecting on what I wanted to achieve this year with my reading I think I did OK... not amazing, but it's been a pretty busy year and I'm proud I managed to achieve what I did. So venture forth to see and I'll be posting shortly my goals for 2019.

Goodreads
What I wrote in January: I’m going to push myself a little bit further than last year and try for 58 books in the Goodreads challenge. Last year I managed 45 and just made it, but I felt that I spent a lot of time wasted doing unimportant things like surfing facebook.

What I actually accomplished: So I ended up reducing my goodreads book challenge to just 40 books in December because there was no way I was going to reach 58. Ah how hopeful and naive I was back in January... 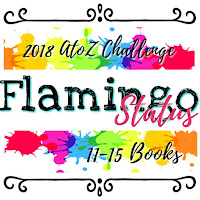 What I wrote in January: I’m also keen to participate again in an A-Z challenge. This year I’ve chosen to do the challenge hosted by Ginger Mom and The Kindle Quest. Last year I managed 15 out of 26 (not my best haha) hopefully I can get all 26 this year

What I actually accomplished: I ended up doing exactly 15 books in this challenge again this year... at least if i'm not doing better, I'm maintaining my mediocrity haha

What I wrote in January: I’m keen to tackle some of my ever-growing TBR pile, so I’ve joined the #Beatthebacklist challenge hosted by a Novelknight. My goal is to read 25 books on my TBR pile pre- 2018.

What I actually accomplished: I really should have thought ahead with this one... the problem was that if I had the first book on my TBR usually the next books in the series weren't (incase I didn't end up pursing the series) so I didn't count any of the subsequent books in this challenge since I technically added them in 2018. So in the end my count was only at 11.

What I wrote in January:So one of my main faults as a reader is my complete inability to finish a series. I either take a break half way through and never go back or I get sick of waiting for the next instalment and by the time it’s released I’ve forgotten what had happened previously. So this year I’ve joined the 2018 Finishing the Series Reading Challenege hosted by Celebrity Readers. I’m hoping to finish between 5-8 series this year.

What I actually accomplished: I am super proud of myself with this challenge. I ended up reading/finishing 7 series this year which is huge for me because its one of the things I am absolutely the worst at! This was by far my biggest achievement this year :)