Review- She's So Dead To Us (Kieran Scott) 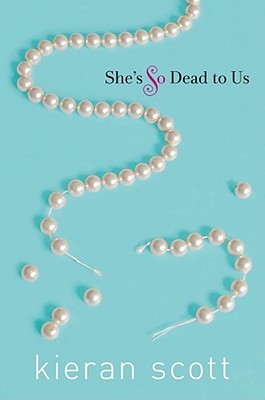 Ally Ryan would rather be in Maryland. She would rather be anywhere, in fact, than Orchard Hill, site of her downfall. Well, not hers exactly—but when your father’s hedge fund goes south and all your friends lose their trust funds, things don’t look so sunny for you. Her mother moved her to Maryland to flee the shame, but now they’re moving back. Back to the country-club, new-car-every-year, my-family-came-over-on-the-Mayflower lifestyle that Ally has outgrown. One bright spot, however, is gorgeous, intense Jake Graydon. But it won’t be easy for the two of them to be together—not if his friends (her former friends) have anything to say about it. Is Ally ready to get thrown back into the drama of the life she left behind? - Goodreads.com

I don't think I've EVER wanted to punch so many characters in a book before!!
The book is told from two perspectives, Ally and Jake. Ally use to live the high life In Orchard Hill until her father made a bad investment with not only their money but also the money of all her friends. After leaving town humiliated, her family are moving back to Orchard Hill after almost two years, but nothing is the same. Ally is no longer apart of the upper class ‘Crestie’ families and has been downgraded to a ‘Norm’. All her old friends have ostracized her and everyone treats her like a pariah. Jake, moved into town soon after Ally’s family left, he knows nothing of her past, except hat all his friends hate her, and that he likes her.

While the book was written well, and I enjoyed the authors writing style, I just couldn’t seem to like the characters. First off we have Ally Ryan, as far as teenage girls go she’s not all that bad. She has some strong moments, where she shows that unlike the other characters she has a moral conscious. But the fact that she is so head over heels for Jake Graydon, who treats her like a stranger when his friends are around, but then tells her how much he wants her in private, is just nauseating. For a male he just comes off as pathetic and weak. Never standing up for what he feels is right and always going along with his friends because it’s easier than causing a scene. The fact that the main female character is attracted to someone who treats her like that baffles me, and really makes me dislike her.

“What's wrong?" I asked.
"Are you serious?" she asked.
"Ally, come on. It's not like we could go to the prom together". I said
"Right, because it's okay for you to slum it with us Norms out here, but God forbid a Crestie take a Norm to prom. The whole world might collapse in on itself". She said sarcastically.
..."What'd you want me to do, stay home?" I asked, my face screwing up in disbelief.
"That's what I'm doing" she shot back.
..."Well, I can't. Everyone's going. And if I don't go, it's going to look..."

- Jakes POV, She's So Dead To Us (Kieran Scott)

Overall the book was well written, the plot was interesting and reminiscent of Gossip Girl meets Desperate Housewives. My main issue was with the characters both main and supporting. I had trouble finding anything redeeming about them. The girls were so catty and nasty and it appeared so for such childish reasons, and the boys just stood about wanting to intercept but never doing anything. There are two more books in the series, which I will read eventually but I need to let my blood pressure settle first.