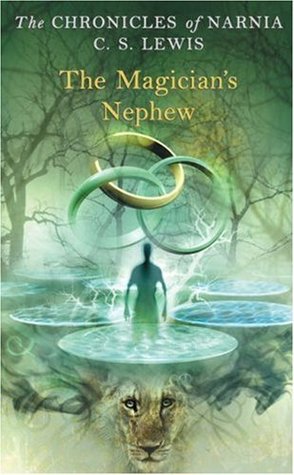 The Adventure Begins. Narnia... where Talking Beasts walk... where a Witch waits... where a new world is about to be born. On a daring quest to save a life, two friends are hurled into another world, where an evil sorceress seeks to enslave them. But then the lion Aslan's song weaves itself into the fabric of a new land, a land that will be known as Narnia. And in Narnia, all things are possible....


As a child I grew up watching the BBC versions of ‘The Chronicles of Narnia’, in a time long before Harry Potter was born. They are probably one of the reasons I love fantasy books as much as I do today (although the aforementioned Harry Potter has a part to play in that too.) To be honest I didn’t even know this book existed for quite some time. I was always under the impression that “The Lion, the Witch and the Wardrobe’ was the first tale in the Chronicles of Narnia. This book was published 6th in the series, but can easily be read as the first book. I actually preferred reading it first, as I already knew the basic premise of TLTWaTW, and this book helped clarify some things that I always questioned. Such as how did Narnia come to be? How on earth did a wardrobe(of all things) lead there? And so on and so forth.

This should come as no surprise, but C.S. Lewis is known for his use of religious symbolism, which as a child I never really picked up on. However as I read The Magicians Nephew I could understand what other readers were talking about. The Magicians Nephew is strife with religious symbolism, which I felt suffocated by at times. For example, the main characters are transported to this world which is dark, blank, where nothing exists. Then suddenly a voice starts singing, the sun emerges and Aslan (who is the one singing) starts creating life in this world ie. Plants, trees, lakes, mountains, animals etc It all just reminded me so much of the first lines of Genesis in the bible ...


“In the beginning God created the heavens and the earth. Now the earth was formless and empty, darkness was over the surface of the deep, and the Spirit of God was hovering over the waters. And God said, “Let there be light,” and there was light”                     - The Bible

There is also a part where the male protagonist Digory, is sent by Aslan to pick an apple from a ‘special garden’, where the young boy is tempted by evil to keep the magic apple for himself. Remind you of the Garden of Eden? These are only a few examples which really stuck out for me, but there are countless others.

In spite of this however, I think many young children would not pick up on these hints at the bible, and some of them actually serve as very good moral lessons. This book was truly a delight to read, and took me back to my childhood. It’s a simple read, aimed at youngin’s, but as a twenty something year old, I still found some magic in it.

Disclaimer *I have tried to rate this book as from the perspective of a middle grade reader, rather than an adult.
Posted by Elle (Lost in Wonderland) at 19:58
Email ThisBlogThis!Share to TwitterShare to FacebookShare to Pinterest