In Sloane’s world, true feelings are forbidden, teen suicide is an epidemic, and the only solution is The Program.

Sloane knows better than to cry in front of anyone. With suicide now an international epidemic, one outburst could land her in The Program, the only proven course of treatment. Sloane’s parents have already lost one child; Sloane knows they’ll do anything to keep her alive. She also knows that everyone who’s been through The Program returns as a blank slate. Because their depression is gone—but so are their memories.

Under constant surveillance at home and at school, Sloane puts on a brave face and keeps her feelings buried as deep as she can. The only person Sloane can be herself with is James. He’s promised to keep them both safe and out of treatment, and Sloane knows their love is strong enough to withstand anything. But despite the promises they made to each other, it’s getting harder to hide the truth. They are both growing weaker. Depression is setting in. And The Program is coming for them.
- Goodreads.com


I’m not a huge dystopian reader. I’ve read a few dystopia ‘classics’, you know the hunger games and other books of the like. But I’ve never really delved into the genre all that much, but I believe Miss Young has changed my mind.  I feel inclined to say now, that I am a fully fledged Dystopia fan.  As for the review, I don’t quite know where to start. I feel that any  words that I write could not possibly do this book justice. In a nutshell, I was absolutely blown away.
In the future suicide has become an epidemic, which is spreading. Teens aged under  18 are the only ones affected and become ‘infected’ after having lost loved ones or suffering terrible loss, spiraling into a deep depression. Enter ‘The Program’ , an agenda put in place to help ‘cure’ people of their suicidal tendencies by removing memories which cause depression.

The book is divided into 3 parts. The first part mainly focuses on the relationships between the main character Sloan and her friends and parents. You discover that teens have to hide their emotions, in an effort to not to be flagged by the organization running ‘The program’ as infected.  Showing any signs of sadness is the quickest way to get you thrown into ‘The Program’.  I love the way the author developed the relationships, they were so real and heartfelt. The tension between Sloan and her parents is palpable, and you could cut the tension with a butter knife during their scenes together.  Sloan and James romance is natural and flows easily as if they were a real existing couple off the page. I felt the character building was amazing and I don’t know whether it was the fact that my partner is also called James or the author’s believable narrative, but when things started to go south and people close to Sloane got ‘sick’, I felt like I was her.  Reading those pages, gave me that horrible feeling in my chest you know the one that feels like your heart is breaking.

Suzanne Young you have a way with words, because I am a stone cold bitch and no one gives me the feels like you do! 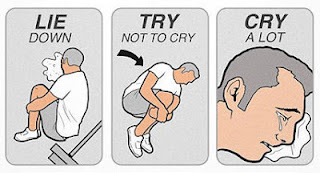 The second part of the story is set in a Program facility where Sloan is undergoing treatment.  There is the introduction of Realm, another teen undergoing treatment who befriends Sloane but is keen for much more than friendship.  Realm is an interesting character; I still don’t know quite what to make of him. He is a great friend and very protective of Sloane, but there’s more to it than that and the revelations that occur are mind blowing...FUCKING mind blowing I say. Without him, Act II would have been unbearable for me, ...and Sloan....but more importantly me.  Of course in the meantime Sloan is undergoing treatment, which is slowly deleting all her memories, and even entire people from her past that ‘The Program’ deems she shouldn’t associate with.

Third Part, takes place after Sloan is released back into the community, and how she deals with assimilating back into her old life. But Sloan isn’t necessarily happy to comply with returning to the community and starts to seek out the memories that have been taken from her, while making a few new (or maybe old) friends along the way.

All in all I completely loved this book. It is so much more than I expected, and the writing was superb. The author’s ability to make the reader empathize with the characters is flawless and I was emotionally invested throughout.  What got me the most was the Epilogue, that had me hyperventilating and on the edge of my seat. I need the next book, like yesterday!!

Things that I didn’t so much like about the book:

Posted by Elle (Lost in Wonderland) at 17:55
Email ThisBlogThis!Share to TwitterShare to FacebookShare to Pinterest